Punakha Tshechu is held right after the popular Punakha Drubchen. The unfurling of the thongdrol (a large tapestry) of Guru Rinpoche is the main attraction of the festival. It is believed that a mere sight of the thongdrol liberates an onlooker and cleanses him of his sins.

Punakha Tshechu, as all Tshechu festivals, honors Padmasambhawa, also known as Guru Rimpoche, the precious yogi and saint who is credited with having introduced Tantric Buddhism throughout the Himalayas. The festival’s masked dances are performed by monks clad in colorful brocade attire and permeated by chants and reading of Buddhist scripts. The culmination of festival constitutes the unfolding of a huge cloth thangka, a sacred scroll, depicting Padmasmabhawa and imagery from Buddhist pantheon. 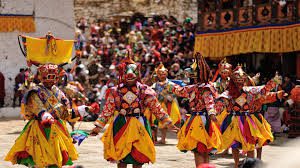 Welcome to Bhutan, the Land of the Thunder Dragon. Touching down at Paro International Airport, you will be greeted by your GET INTO BHUTAN TOURS guide upon exiting the arrival hall. Today, we will take it easy to acclimatise to the altitude. Drive to Thimphu, check in to the hotel and let’s have your first taste of Bhutanese cuisine and some light sightseeing, like the weekend market, in Thimphu. Heritage Museum – dedicated to connecting people to the Bhutanese rural past though exhibition of artefacts used in rural households. Textile Museum – witnesses the art of traditional weaving. Simtokha Dzong – Five miles from Thimphu, on a lofty ridge, stands Semtokha Dzong the oldest fortress in the Kingdom. 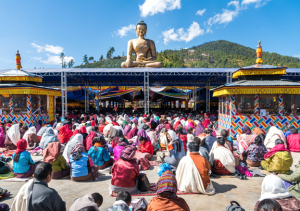 National Memorial Chorten – Which was built in honor of the 3rd late King Jigme Dorji Wangchuk. Papermaking Factory – Witnesses the art of paper-making. Day Trek to Tango Goemba and picnic/lunch by river in the afternoon. The Tango Goemba site has had religious significance since the 12th century when it was the home of the Lama who brought the Drukpa Kagyupa school of Buddhism to Bhutan. The monastery was built there in the 15th century by Drukpa Kunley (The Divine Madman). Tango is the highest center of Buddhist learning in the country; almost every Je Khenpo (religious head of Bhutan) completed the 9-year program there. After completing that program, monks traditionally spend 3 years, 3 months and 3 days in mediation at the nearby Cheri Goemba retreat, built in 1619 by Shabdrung Ngawang Namgyal, the founder or first unifier of Bhutan. It is currently the home of an 11-year-old boy believed to be the seventh reincarnation of the fourth desi, or ruler, of Bhutan. Centenary Farmers’ Market – Every Saturday and Sunday most of the Thimphu population congregate on the banks of the river where the weekend market is held. Here villagers from the valley and other nearby places come to sell their agriculture products.

Punakha Dzong – Built in 1637, the dzong continues to be the winter home for the clergy, headed by the Chief Abbott, the Je Khenpo. It is a stunning example of Bhutanese architecture, sitting at the fork of two rivers, portraying the image of a medieval city from a distance. The dzong was destroyed by fire and glacial floods over the years but has been carefully restored and is, today, a fine example of Bhutanese craftsmanship. The Punakha Tshechu, as all Tshechu festivals, honors Padma Sambhawa, also known as Guru Rimpoche, the precious yogi and saint who is credited with having introduced Tantric Buddhism throughout the Himalayas. The festival’s masked dances are performed by monks clad in colorful brocade attire and permeated by chants and reading of Buddhist scripts. The culmination of festival constitutes the unfolding of a huge cloth thangka, a sacred scroll, depicting Padma Smabhawa and imagery from Buddhist pantheon. Khamsum Yulley Namgyal Chorten – Built by the third Queen Mother Ashi Tshering Yangdon wangchuck this Chorten is a splendid example of the Bhutanese architecture and art and is the only one of its kind in the world. It has been built over eight and a half years and its details have been drawn from religious scripture.

Punakha Dzong – Spend the afternoon in Punakha reveling in the festivity with the locals and tourists at the Punakha Tshechu taking place in the grounds of the magnificent 17th century Punakha Dzong. The Dzong also known as ‘Palace of Happiness’ stands at the confluence of 2 rivers, Pho Chu (Father) and Mo Chu (Mother), portrays the image of a medieval city from a distance. It is the most beautiful and well-known fortress connected with Bhutan’s historical traditions and houses sacred artifacts. At the festival, witness religious mask dances performed by monks including colourful Bhutanese dances and other forms of entertainment, and also get a truly authentic experience and insight in these unique, colourful and exciting displays of traditional culture.

Later, walk along the 160 meters Pho Chu Suspension Bridge with a spectacular view of Punakha Dzong and the Pho Chu Valley. Overnight: Punakha

Chhimi Lhakhang – After our leisurely breakfast, we will hike to Chimi Lhakhang, temple of fertility is a associate with religious arts of phallus which is a 20 minutes walk across terraced fields through the village of Sopsokha from the roadside to the small temple located on a hillock in the centre of the valley below Metshina. Ngawang Chogyel built the temple in 15th century after the ’divine Madman’ Drukpa Kuenlay built a small chorten there. It is a pilgrim site for barren women and here after descending back down from Dochula, we will follow our way back up the dramatic Wang Chu and Paro Chu river valleys, before crossing through Paro town towards the north end of the valley. We take an opportunity for a quick stroll to the nearby town and village. Evenings enjoy the facility of a man soaking yourself in to culture, spa or perhaps enjoy the Bhutanese movies that hotel provides in a room.

Drukgyal Dzong – A morning drive, north of Paro valley brings us to the ruins of Drukgyal Dzong. Built in 1647 by the great Shabdrung Ngawang Namgyal, father and unifier of medieval Bhutan, the Dzong was destroyed by an accidental fire and left in ruins as an evocative reminder of the great victories it was built to commemorate.Explore the ramparts and relive the memories of a glorious past. Taktsang Monastery – A one hour hike to the cafeteria is also a vantage view whereby you can enjoy the stunning view of the monastery. Prayer flags adorn the cliffs and this is also where Guru Padmasambhava landed on the back of a tigress in the 8th century. Kyichu Lhakhang – After a sumptuous local lunch, we will retrace our steps to visit Kyichu Lhakhang, one of the oldest temples in Bhutan.

After breakfast, we will transfer to Paro airport for our flight and we bid a fond farewell to the Kingdom of Bhutan